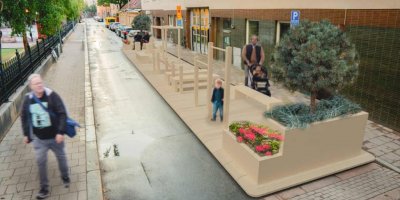 As the pandemic hit, cities around the world began to challenge the assumption that streets belonged to cars. During  lockdowns imposed throughout the world to curb the spread of the pandemic, the sheer amount of space that cars had been taking away since their appearance less than a century ago became starkly apparent. Can we envisage our streets without cars?

The city of Paris’ “15-minute city” concept and Barcelona’s  superblocks are well known. However, now Dan Hill, the Swedish director of strategic design at Vinnova, Sweden’s state innovation agency, is working on a project that may well revolutionise street spaces further. Hill is partnering with architecture curator Kieren Long, Director of ArkDes, Sweden’s national architecture and design museum, to reimagine different ways to use street spaces. The concept is called “one-minute city” because it operates at the street level, the areas just outside front doors, where residents meet with neighbours daily. The one-minute city experiment is part of a government project called Street Moves. The objective is to devise alternative uses for on-street parking spaces and consider more efficient uses for these often-overlooked locations.

The new physical infrastructure consists of modules of wooden strips that can be assembled rapidly to create a larger module covering the street space and that can be used for recreational purposes, supporting seating and greenery, or as a mobility hub for micro-mobility services such as e-scooters. The space just outside the doorstep is proving a fertile ground for fostering engagement and participation with the community. The experiment adopts a similar approach to the pop-up “parklet”; however, the overall project is implemented by the Swedish government and co-created with the streets’ residents. The first unit was built in Gothenburg, with more to follow across other Swedish cities. The potential lost revenue from paid parking is undoubtedly a challenge for this experiment. In order to counter-balance this deficit and reduction in parking spaces, the project must give people a high-quality new public space that makes these losses worthwhile. 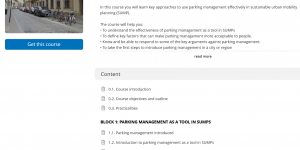 The recently published e-course, which focuses on parking management…